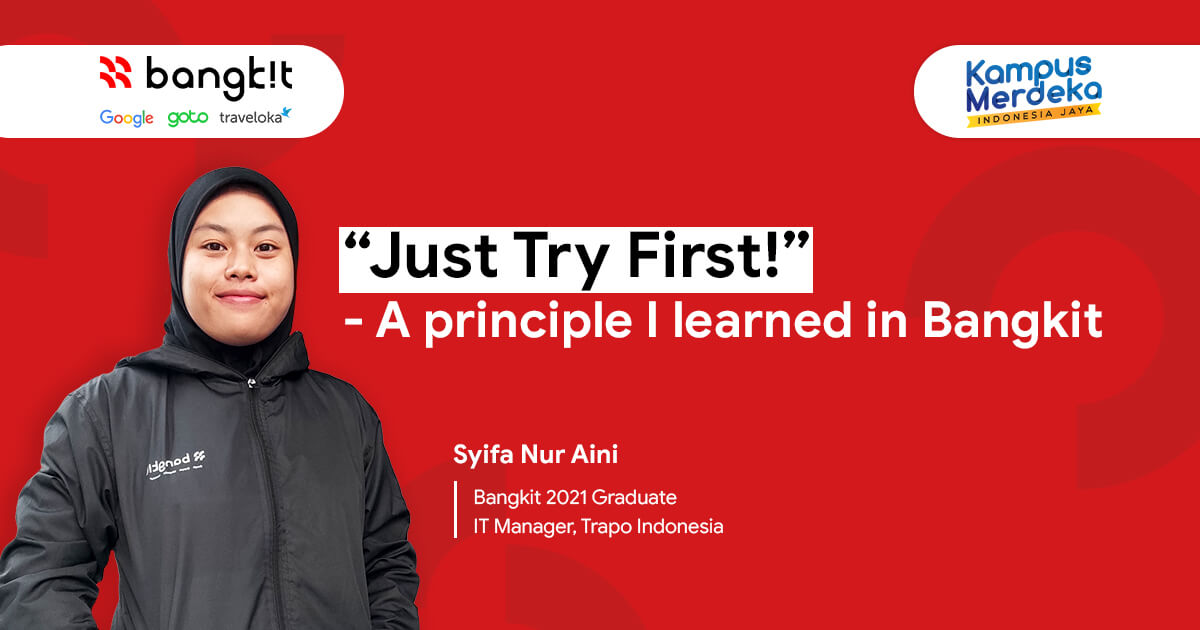 Push Yourself to the Limit

A story from a tough female graduate of Bangkit 2021

The number of women’s involvement in STEM (Science, Technology, Engineering, Mathematics) is only 30%.

The percentage of women involved in STEM is relatively low. However, let’s dig deeper into the collective stories of all these women. Among them is Syifa Nur Aini (23), one of Bangkit 2021 female graduates from Bekasi, Jawa Barat.

Syifa Nur Aini chose to learn Machine Learning in Bangkit 2021. With almost no interest in Mathematics, Syifa was initially unconfident in her learning process. But one thing is for sure; she’s aware that to be an expert in Machine Learning, she has to push herself a little more challenging. 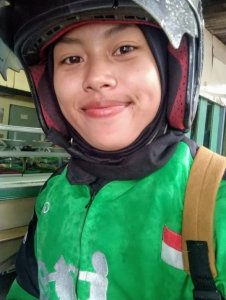 Syifa with her GoJek uniform

Syifa is the eldest daughter of merchants, and she has two younger siblings. There isn’t much hope from Syifa’s parents for her. They want their firstborn to become someone helpful, sincere, and patient in doing anything she should.

As someone persistent and vigorous, Syifa wants to have higher education. Studying in college is one of Syifa’s plans for her future. Unfortunately, the financial situation of her family is not very good. Syifa’s irresistible desire to learn made her decide to study while taking part-time.

The part-time job that Syifa chose was a GoJek driver. During the day, she divided her time between attending classes and taking customers’ orders in the streets of Bekasi. As a result, she could not take as many semester credits as her friends. Thus, her study period lasted longer than usual.

“I am not all ashamed of being a GoJek driver because I can learn much from this profession. I can communicate with others well and feel more grateful ‘cause many good things happened, like getting appreciation from customers.”

As a person who likes to socialize, Syifa enjoyed her part-time job. What made Syifa put her heart into her career is her love of riding a motorcycle and her responsibility to pay tuition fees.

One day, Syifa came to a point where she began to think about the future of her education. She enjoyed her part-time job, but she wanted to graduate for the sake of a better future. Then, after a few semesters, Syifa started focusing on her education in the 8th semester. She then looked for a free online course to fulfill her desire to learn.

Syifa said that she’s a person who can study better under pressure. When she was looking for a free online course to upgrade her skill, she found Bangkit. She saw that Bangkit is a program with a solid syllabus and thought it would suit her greatly.

At first, the 40.000 applicants for Bangkit 2021 quite discouraged Syifa, but she tried her best to get into Bangkit. She knew that Bangkit was worth fighting for. Finally, she made it and became one of 3.000 selected students.

For Syifa, Bangkit is a particular program. She believes it would upgrade her skills for a better career and pave the way for applying for a master’s degree. The impacts she felt the most from Bangkit were the vast network and excellent quality of her CV. She became someone whose quality is highly reckoned with because she had studied in Bangkit.

At first, Syifa thought that Machine Learning was something that seemed too difficult to deal with. Even Syifa had intended to withdraw initially, but she thought twice about it. She asked herself, did she have to squander the opportunity that’s pursued by thousands out there? Then she guessed no. She pushed herself to the limit to learn everything necessary and finally made it.

Syifa’s activity at her office

While taking part in Bangkit, Syifa started her new career in Trapo Indonesia, a car carpet company based in Jakarta. She began with the role of part-time IT Support. This means Syifa should be able to arrange her solid schedule.

Usually, at 5 a.m, Syifa starts her day by doing her duty as a GoJek Driver. After that, she will focus on her educational activities on campus or at Bangkit. Then from 5 p.m till 11 p.m, Syifa carries out her responsibilities as part-time IT Support in Trapo, Indonesia.

Syifa admitted that she was a procrastinator. Everything she had to do was put off until the deadline came. But Bangkit changed her. This program forced her to move faster and more precisely. All the tight deadlines in Bangkit shaped her into someone new, a good time manager.

“Bangkit makes me good at time management. I can study, do my part-time job and take Bangkit courses simultaneously. At first, I doubted myself about managing my schedule, but Bangkit taught me to do anything first, try first, before saying ‘I can’t do it.’”

Apart from ensuring that her schedule of activities went according to plan, Syifa also undertook her capstone project. She was working on a project that enabled machines to identify fruit ripeness levels—the project aimed to reduce food waste.

What makes Syifa great is that while she dedicated herself to her study and work, she succeeded in getting Tensorflow Developer Certification. She said the learning materials she got from Bangkit came out in the exam. Her perseverance in learning made her think that the certification exam wasn’t too hard.

“Don’t Do Anything Halfway.” 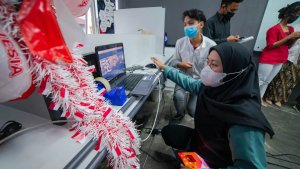 Now Syifa is an IT Manager at Trapo Indonesia

Syifa has completed her studies at Bangkit with extraordinary achievements. Many skills and knowledge were acquired from Bangkit, making Syifa appointed IT Manager in Trapo Indonesia.

There are many learning outcomes from Bangkit that support Syifa’s current career. The most impactful lessons that Syifa gets are Time Management, Critical Thinking, Problem Solving, Adaptability, Persuasive Leadership, and Professional Communication. Those skills have made her move forward and become an excellent IT Manager in her current company.

As an IT Manager, Syifa is responsible for monitoring, handling projects, reporting projects, and doing trial and testing software. To do her daily tasks, she’s helped by one IT Staff. The knowledge Syifa acquired from Bangkit helped her in carrying out her role in her current company.

Bangkit motivated her to keep learning, be technology literate, and have excellent soft skills. Syifa also learned much about attitude, time management, relationship building, etc. It is impactful for her job.

While being responsible for her IT Manager role, Syifa is preparing herself for graduation. She is in the final semester and will write her bachelor thesis. Syifa hopes she can graduate soon to be more focused on her career growth.

For Syifa, life is a continuous learning process. She also wants to emphasize that women can do anything they want to pursue their dream.

“Don’t do anything halfway. Never believe in someone who says women can’t go further. Women can do anything they want and be independent. I proved that I can ovecouldme all challenges in my life, from being a taxi bike driver to becoming a leader. I believe that women can contribute more to the nation and build a better future.”

From her story, we can conclude that Syifa is a tough yet inspiring female leader. Do you also want to be an impactful female leader? Start your journey in Bangkit 2022! Sign yourself up on g.co/bangkit (deadline: December 31, 2021)!

Read the story from other Bangkit students here: 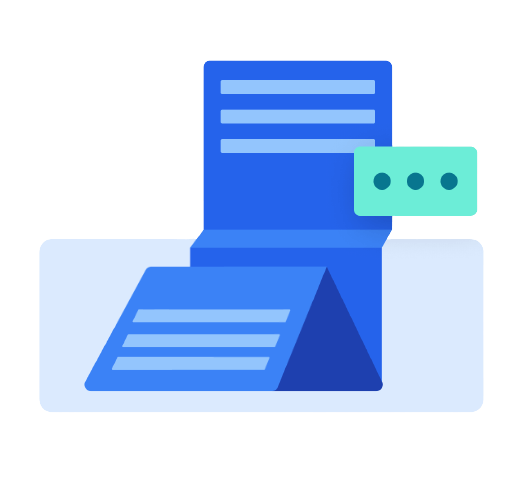