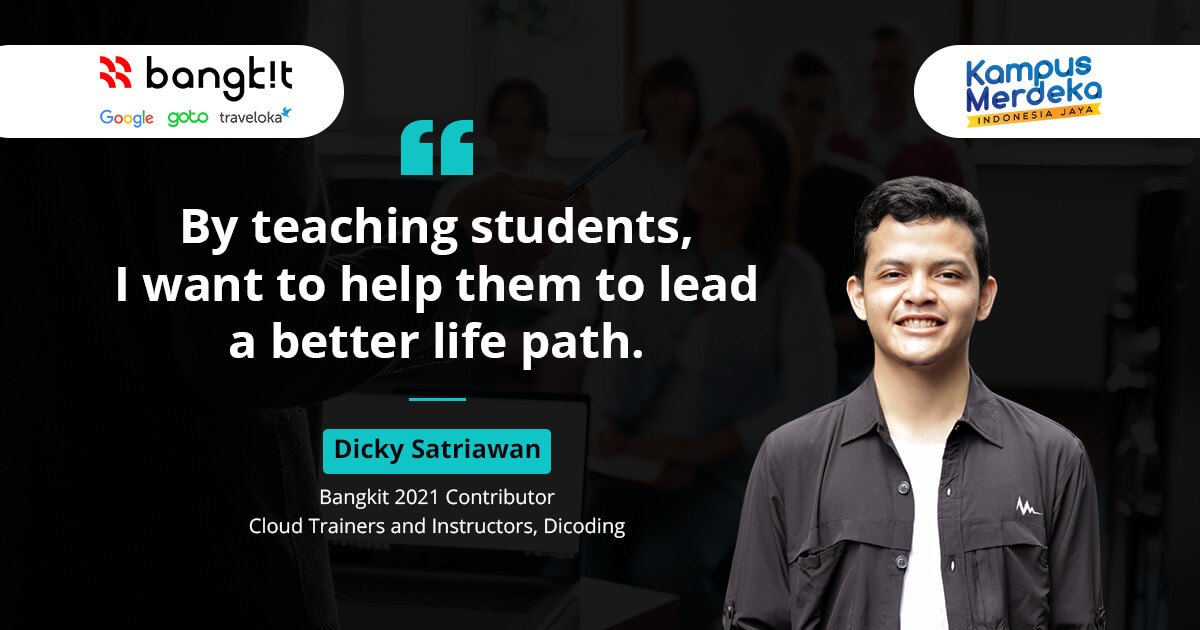 “It’s About Giving Back”

Living in a fast-paced world like these days, yet Dicky Satriawan (24), one of Bangkit 2021 contributors, still had to struggle about the internet connection in his village, Pakah, Mantingan districts, in Ngawi, East Java.

Dicky’s passion for learning and giving is big, but his resources are insufficient. Nevertheless, it didn’t prevent him from giving his best in Bangkit, a digital talent development program by Google. Dicoding has been entrusted to be Bangkit curriculum provider since 2019.

Born and Raised in a Low-Tech Neighborhood

Dicky was born in and raised in a neighborhood right in the middle of a forest. He’s the youngest of two siblings, with a mother who works as a teacher and a father who’s a retired civil servant in  forestry (dinas kehutanan). His parents’ decent job contributed to fairly good literacy in his family compared to others in his village.

Young Dicky was someone who liked to play on the computer. He put his interest in PC gaming and sometimes he tinkered his own laptop. Even when Dicky was in high school, he did a favor for his headmaster to troubleshoot the computer. His experience with computers made him decide to really dive deep into informatics in college.

To elevate his competence in computer science, Dicky studied Informatics Engineering in Brawijaya University. Being an informatics engineering student sparked curiosity among people in his neighborhood because none of them was familiar with computers at that time. This was something new to the youths in his village. In his hometown  the common occupation is in agriculture and forestry, such as farmer, forest guard and conservationist, and so on, just like Dicky’s father.

It was difficult for Dicky to assure his parents that IT is a promising field to earn a living. All they know is that being a “PNS” is the most preferable work for life. The only family member that gave him full support was just his older sister who understands what he’s doing.

Dicky faced a tough situation in his final years of college. His family was experiencing tragedy and hardships that made Dicky have to rise up, including to support his family financially.

At that time all he thought was to improve his skills and knowledge in order to get a job easily. Then Dicky decided to learn Google Cloud by himself. The problem was the internet speed in his forest-bound village was only 100 Kbps. No matter how slow the connection was, Dicky still put much effort into learning Google Cloud. He was so patient that he could do house chores and read documentation while waiting for the internet speed to process his request.

To enrich his knowledge, Dicky participated in various government scholarship programs. There were lessons in this program that took place independently, some were bootcamp. His perseverance and passion in learning Google Cloud made him succeed in earning Google ACE certification for free after joining Cloud Computing Online Academy by Digital Talent Scholarship from Kominfo x Google. Limitations didn’t block his way to achieve more. Because of this certification, his resume was getting better and more visible for potential employers.

As a result, a fresh graduate Dicky landed his first job as a Support Engineer in a startup. Working remotely, he rode his motorcycle as far as 40 km from his house to find a stable internet connection. Once again, his everyday’s challenging situation fueled his spirit to give out his best. He spent 2 months working in the multi-region tech startup, Pointstar, a job that enabled him to earn a living for him and his family. Slowly but sure his parents understand Dicky’s passion in the IT field and support him all the way.

As time went by, during his time in his first company, Dicky got information about the opportunity to become a Bangkit contributor. He heard that Bangkit was a digital talent development  program for all Indonesian students. He suddenly felt an attachment.

Dicky Wanted to Give Back

Knowing Bangkit, he felt an instant call to give back. Out there, Dicky felt that many Indonesian youths from less privileged backgrounds like him, are looking for an opportunity to improve their and their family’s well-being. IT education like Bangkit promises a way to make it happen. Deep inside, Dicky is also truly aware that his skills and knowledge used for living was derived from free IT training and certification like Bangkit.

“I can grow and develop myself with the help of a scholarship. I think it’s time for me to give back by taking part as a contributor in a scholarship program.”

In Bangkit 2021, Dicky was assigned to be a dedicated contributor who taught in synchronous classes. In total he led more than 90 sessions on Cloud Computing with Google Cloud in which he shared his experience on Introduction to Cloud Computing, Networking in Cloud Computing, Preparing ACE Exam, etc.

Dicky also said that Bangkit has an emotional attachment to him. When Dicky was contributing to Bangkit 2021, he went through some trying times in his personal life. Bangkit seemed to have its own meaning for Dicky, a sign for him to rise up and come back stronger. He felt that he also needed to share what he knows best -cloud computing. He was empowered by the fact that he and all other 386 volunteers could help younger people to lead a better life path, by earning skills for life.

“It was an honor for me to have an opportunity to teach students from all over Indonesia. Although sometimes I question “did I do this well?” Some students got back to me and said that I could deliver the learning material well. Other students also came forward and said that they had been  inspired by my sessions, thus aiming to be an IT educator in the future.”

Reading the heartwarming feedback from his students made Dicky cry in happy tears. The students told him that Dicky was able to teach with easy language and simplify complicated tech terms. It really eased the students to understand the learning material. Also Dicky tried to be different by creating an engaging atmosphere in class. To catch a student’s attention, he tried to be friendly and engaging.

Dicky felt immense happiness when knowing his student graduated and got hired by companies. He couldn’t believe that he took part in a program that helps people develop themselves, make achievements and grow into a better version of themselves.

“You don’t have to be an expert to start something,” Dicky quoted his most favorite saying from Tiny Wisdom.

These words encouraged Dicky to give his best while contributing to Bangkit 2021. With Bangkit, he had unforgettable teaching experience, encouraging appreciation from students and also a better job opportunity. His decision in taking part in Bangkit didn’t only give an impact to the students who joined, but also influenced his competence as an instructor. After Bangkit, he’s more motivated to be an educator. Result? He recently received a Google Educator Level 1 Certificate.

For Dicky, Dicoding is a dream company that he had known since he was in college. Therefore, when a job offer from Dicoding was coming, Dicky was very surprised. He couldn’t believe that his excellent performance while teaching in Bangkit led him to the unexpected opportunity. Dicky was offered to contribute more by being a Dedicated Instructor for Bangkit in Dicoding.

After Dicky finished contributing to Bangkit, he used his time to develop himself at Dicoding by taking part in the Academy Team. His passion for sharing and giving encouraged him to create a course named Belajar Dasar Google Cloud or Learn Google Cloud Basics.

The best thing Dicky had to be proud of was his achievement that made Dicoding become an increasingly reckoned company. Dicky was one of two Dicoding talents who were successfully certified as Google Professional Cloud Architect. These achievements met the requirements needed by Dicoding to become a Google Cloud Authorized Training Partner.

It can be concluded that being someone who is beneficial and impactful to the surroundings is a value that Dicky holds dearly.

Think about giving back the knowledge that you have and being an impactful person? Then it’s your turn to make an impact in Bangkit 2022! Apply to be Bangkit Contributor 2022 here